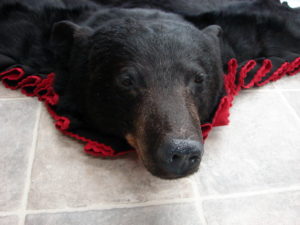 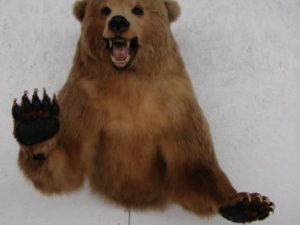 Massive Real taxidermy finished Kodiak Bear rug.  Tag on back states it is from the premier taxidermy studio: “Jonas Bros. Seattle WA”.  This massive rug measures about 94″ from nose to butt, 91″ across the front paws, 82″ across the back paws and the huge head measures about 20″ from ear to ear and 32″ from nose to bottom of the neck.  This has the wiry coarse fur of a Coastal bear. We are guessing this rug was done in the 1970’s or 1980’s so you do not need to feel bad about walking on and enjoying this rug.  Issues are the two orange-tinted spots on his back that you can see in the pictures (have not attempted to clean), some miscellaneous small staining on the canvas backing (that nobody would see) and his front claws were not included with him. This would be a very expensive bear due to size when he was new, but since he is used the price is reflected as such.  Due to the weight (around 50 pounds), there are no hangers on the backside.